Continuing the game from previous session.
Behind the hedgerows there was ditches that worked as trenches. Also a wooden MG position was hidden inside a thicket. The Soviets moved forward and encounter fire from point blank range which has very little effect. Finally a firefight ensues but there is hardly any visible effect even if plenty of gaming time passes.

The Soviet tank has located the German MG nest and is pounding it into oblivion. The Soviet infantry is staring to get past the wire into the German trenches. 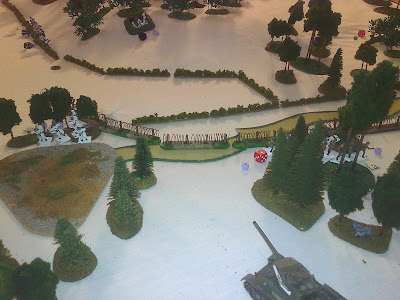 If the test game in the shooting range flowed well the experience with actual enemy that shoots back is quite the opposite. Most often nothing much happens during the game -the game flow just seems plain bad.