Last year Aksu designed the rest of us a great Eastern Front campaign where we played several interlinked scenarios using a German recon battalion and the opposing Russian forces. Since Aksu is currently our correspondent in London Andy GMed the scenarios using BKC. Actually this way we managed to get ourselves acquinted with the new rule system in a very nice way.

Even though the campaign had actually ended we still had one scenario to play and it was the actions of a Kübelwagen company behind enemy lines. Aksu decided to do it as a skirmish with Battleground WWII and Mr. H ran it for us punters.


Here's how it went:
I was once again assigned to play Germans who were returning back to own lines to the south and needed to cross the river with their three Kübelwagens (one command car with radio and two equipped with a MG. All had 4 passengers of mixed quality and one veteran had a light wound). A bridge has just been spotted and guys that walked to the edge of wood reported having seen just three Russian standing on the road where one was exchanging a tyre to motorcycle with a sidecar. Right next to them was also a gun pit equipped with a AAMG. Plenty of tank and truck wrecks were also in the vicinity. (Germans would be arriving from the small track from the left in the pic below) 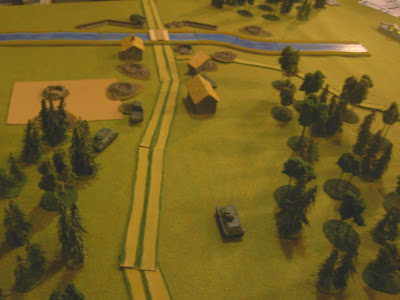 Since I knew that my troops were being followed by a Russian armored car I knew that there was no chance of any subtleties -the only things that the troops had that were of use against it was 4 tank mines and some grenades if it came to the worst. So instead of pussyfooting around and trying to scout the area some more which would've cost the Germans way too much time I decided to just floor it and hope for the best. That is, after placing three of the mines in the road to take care of the armoured car. 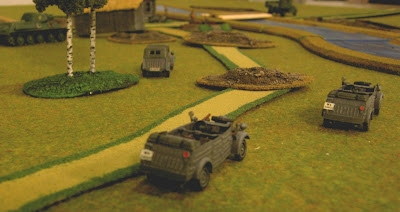 Unfortunately when the Kübels surged into the clearing the gunpit had been occupied (the driver for the NKVD colonel just didn't feel chatty with mere regular infantry Josefs...) and the Ruskies immediately also recognized the vehicles as enemies and opened with the AAMG up to which the Germans naturally responded blazing away with what they had. Unfortunately the Russian salvo hit one Kübel dead on and killed the gunner (who else, eh?).

The remaining Germans drove rather recklessly and concentrated their fire against the gun pit wounding the gunner's assistant. The motorcycle's driver also started shooting as did a sergeant from inside the cabin. The NKVD colonel opened the cabin's door and dove behind the motorcycle and drew his Nagant. Some Ruskies also appeared from another cabin a further away from the bridge and started shooting. 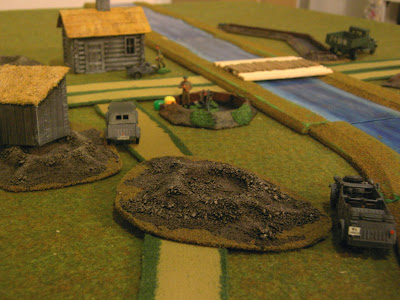 Things weren't looking that good for the Germans but it sure didn't look helpful when a Russian truck appeared from the north. Closer to the bridge guns were ablaze and grenades were being thrown, but to very little effect, even if one German grenade landed right next to the motorcyle and its driver -damn those forced laborers sabotaging the war effort of the Reich! 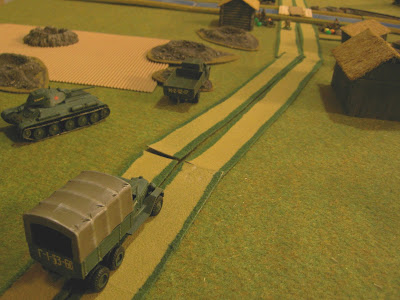 The already damaged Kübelwagen that was also trailing a bit behind got hit by another salvo from the AAMG now killing another passenger and the driver which made the vehicle steer steeply towards left causing it to collide with a wreck of a T34. 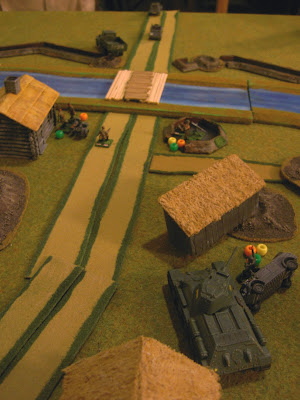 The collision wounded the car's last survivor, a veteran Gefreiter. But immediately after clearing his head he was enthusiastically greeted by the three nearby Russian soldiers and the Gefreiter decided that surrender was the only sane option. 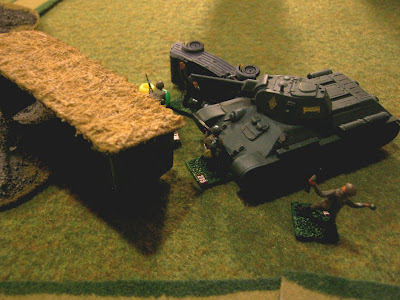 As the last member of the Russian roster, a member of female corps, ran from the cabin to help the wounded in the gun pit the Russian BA-10 arrived to the scene, naturally missing all three mines, as well only to see the two remaining Kübelwagens tail lights disappear in a cloud of dust on the other side of the river, having raced the gauntlet and still evading the sporadic fire from the surprised Russian bridge guards. 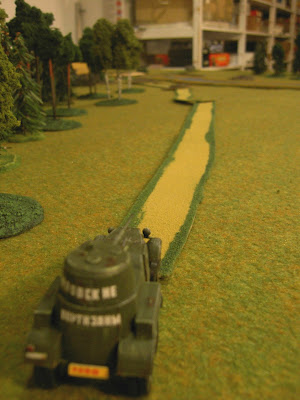 A nice fun scenario that is made better by giving the Jerries a threat from behind thereby forcing the to do something instead of trying to covertly pick of the bridge guards. There are few troops on both sides and even though it seems that the Russians get reinforcements it is just a truck with a driver carrying supplies to the front. Good stuff on the design, Aksu!


We noticed a problem with the rule system; when shooting at a moving soft skin vehicle with small caliber guns it doesn't really matter how quickly the vehicle is moving -so it is just as easy to hit a Kübelwagen moving recklessly at top speed as one slowly reversing :(

Firing from a moving vehicle is near impossible, for example throwing a granade needed a "3" or less on d20 to succeed, which I did but then naturally managed to fumble two rolls on A-ring (the best) on effect chart. Luckily on the Russian side Eero also threw pretty badly (as is customary to him -here's probably the ONLy guy in the world who h worse luck with the dice than I do...), although the chap is slowly learning since he did get to fire some pretty effective salvos as well. What is the world coming to when you can't rely on old constants anymore!? ;D