Did the second playtest with another set of rules, Scramble!

They seemed to work better than I recalled based on our first experiment with the rules. Actually with Scramble the game flowed better than with Sturmovik Commander which came to me as a surprise. Also the all important feel seemed to be a tad better. Here's the link to the Rules Update 1.4 PDF from which you can gleam some info on the system.

We managed to play two games with Scramble! and in the second one we tweaked the initiative system a bit so instead of having just one initiative for a side we generated initiative for each formation. This seemed to make the game more interesting and also somewhat more tilted in favor of better pilots.

In the first game we noticed that if a plane, like I-153, has a turn ratio of 1 (meaning after each 30 degree turn it must move 1 inch) it can really fly circles around those with turn ratios 2 (I-16) and especially ratio 3 (Brewster). You shouldn't get into dogfight with a more agile plane, even if it is piloted by a green pilot! You can make a pilot roll to turn 60 degrees but need to score less than your pilot skill on d10 or stall so you're doomed to stall sooner or later even if you're a good pilot. Most likely sooner...

Shooting distance, compared to plane scale was quite short, being 4 inches for machine guns. For comparison, a Brewster moves 12 inches in turn.

Also bomber gunnery seemed to be really quite effective with around 25-30% of shots hitting the target so it also goes against the gut feel. You REALLY don't won't to find yourself in the middle of a bomber formation with multiple gunners shooting at your fighter.

All in all a solid and enjoyable game and based on these two consecutive test games I'm inclined to say Scramble is the better one -not that Sturmovik Commander isn't a solid system mind you. There seemed to be somewhat more distinction between different aircraft and it played quicker. Naturally we already had some ideas we wanted to include to system but we must be careful not to go overboard with these as not to add too many bits to the system -especially when we don't have that many games under our belt with it. For example Mr V really likes the Avalon Hill's old Mustangs boardgame so some bits from it might get adapted.

A Brewster formation closing in on a Soviet blind. 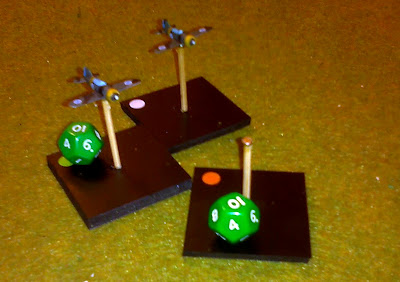 I-16 is going down in flames, a Jak-1 is in dire straits and I-153 would be fine, if it wasn't shot to smithereens (one hitpoint from destruction). 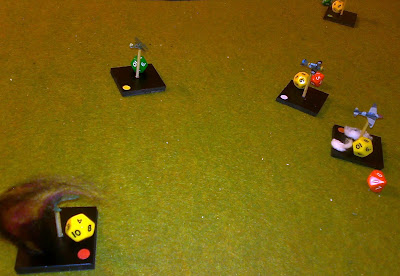