Yesterday Mr H tried to run three Battleground WWII recce scenarios for Mr V and Janne, but we managed only to complete two of them. 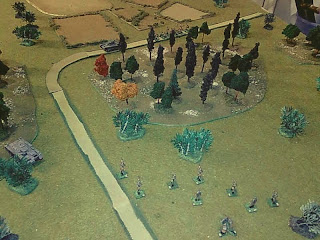 As we haven't used the system for quite a while the first scenario was an easy rumble where two similar forces of a light tank supported infantry squad run across each other in a terrain dominated by very high grass and some light woods.

It immediately became clear that Mr V seemed actually retain the best grasp for rules while Janne just fumbled onward getting his PzKpfw II shot by Mr V's T-26 in the 1st round. After this Janne's Jerry squad ran into the forest to get some cover from the tank but got so close to Mr V's Ruskies that they became a target for selected charges of superior numbers. However Janne was able to kill at least one of the attackers from each combat and after geting his next turn he started of shooting the remaining Russians. One poor fellow got wounded and tried to crawl away, but the bloodthirsty Jerry squad leader and mg assistant followed him with their Lugers ablaze. Mr V's T-26 entered the wods but Janne spread his troops and made close assaults using grenades and soon the tank was a burning wreck. Jerries 1, Ruskies 0. 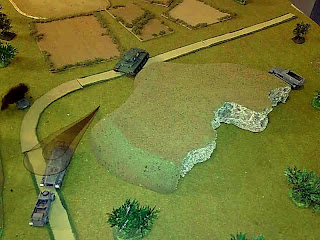 The next scenario started with Jerry recon force (sdkfz 232, a squad in sdkfz 251 led by a command section in a Kubelwagen) entering quite similar looking terrain and seeing a burning wreck of a Kubelwagen burning in the turn of the road. The Jerries advance carefully looking for Ruskies hiding in the forest but find none. Circling the unclimable steep cliff the Jerries encounter a KV-1! Immediately this monster squirts flame (it is a flamethrower model) against the 8-rad which is disabled fortunately with just one casualty. Meanwhile the Hannomag squad decides to dismount and hide in the tall grass while the halftrack presses on -and gets two dozes of flamethrower after the tank turns in its place to face these attackers from the rear. Again the Jerry crew manages to flee the burning wreck.

The remainder of the game the Jerries slowly crawl or dash towards the tank (that has its left track disabled and thus it can only pivot in place) with their satchel charges and grenade bundles while its crew tries to blindshoot them with the flamethrower, coaxial machine gun and with the occasional burst from the commander's submachine gun -the last actually having visibility. Finally three Jerries manage to climb on top of the tank and its turret after the tank commander got shot. As the turret hatch was left open from the dead tank commander they rake the insides with a MP40 and a rifle fire and finish the job by throwing a grenade bundle in. Jerries 2, Ruskies 0. 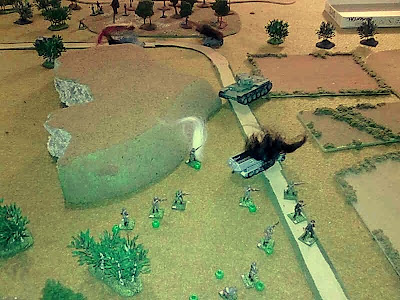 Otherwise quick fun games but I REALLY hate the way how attacks against tanks are performed by infantry in the game. Even with an immobilized (large) tank you need to roll around 10 or perhaps even less if you try to place the satchel charge on top of the engine compartment when you are standing adjacent to the bloody thing (and after misplacing it the thing somehow drops into the lap of the placer or his buddy standing on the other side o the engine compartment)! I mean the engine compartment of a KV-1 isn't THAT high after all and when you're behind the tank it is rather accessible. Heck, you are able t climb on top of the engien compartment by rolling under your morale. I more or less am able to swallow that you need to score 2 or less when throwing something from a distance especially if the tank is moving, but placement of explosives kinda blows.

Also the range of the flamethrower was, erm, rather incredible! Mr H used some unofficial rules for this and the extreme range for the weapon was 52 inches or something. Rather incredible if you consider that, for example, the range for a submachinegun is parhaps 26 inches and I'm willing to bet that a SMG can shoot longer than a flamethrower. Normally flamethrowers just use a template template of 7-8 inches which is more in scale with the other distances of the game...

This is the blog for GeMiGaBoK -the Gentlemen Miniature Gamers and Brass Band of Kaisaniemi.

The main purpose of the blog is to enable the club members easily write reports of our semi-weekly gaming dates etc.