This Monday we finished the second scenario from the last time. Flow was very good and both players seemed to be streched for resources and struggling to fulfill their objectives, although I guess that for the Russian player this is quite a stationary a scenario... 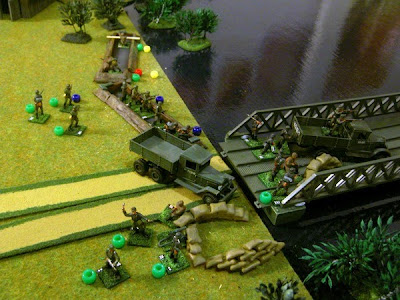 Cleaning up the last of the dazed Ruskies form the German side took few turns. Funnily enough, from his own trench a German NCO started cleaning the nearby trench by throwing grenades, only to fumble and have one bounce back and explode in his own feet. This, however, was a German ploy as the effect was a morale check that resulted in making the Jerry an elite hero!

As planned previously, the Germans put the captured MGs into use and peppered the Russian MG pit with continuous suppressing fire from two LMGs, and on the other side of the bridge the fire to the trench and the AA gunpit came from a LMG and MMG.

Luckily, after the initial pile of casualties it managed to cause, the MGs finally were able to keep the AA gun crew suppressed, but if there had been just one gun doing it this wouldn't have been possible. This effectively settled the game and gave the Jerries a fighting chance by keeping he Russians mainly prone and causing an occasional wound. 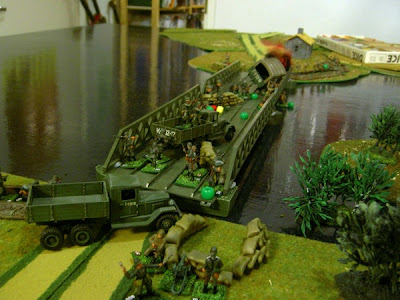 This didn't leave that many Jerries on the bridge to continue the assault to the Russian side. The fact that the house directly looking towards the bridge also housed some Ruskies didn't actually help. The Jerries set up their last LMG on the bridge and proceeded to give the Ruskies lead in abundance. However the stubborn Russian resistance soon resulted in continuous flow of German casualties and the last MG was almost immediately operating with partially wounded crew which meant that it could't lay suppressing fire.

The Jerries still stubborny threw whatever guys they could towards the Russian side and despite the heroic and effective efforts of the MG pit's squad leader as well as the Russian officer against the charging Jerries (the officer shot at least one German with his pistol even though he was wounded) these managed to gain a foothold on the trench. 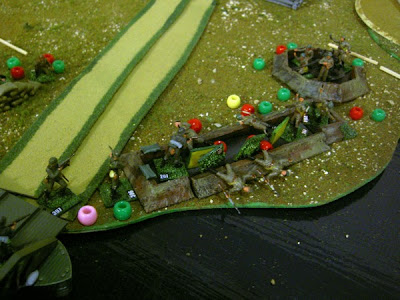 This trench was effectively cleaned by one furious Jerry whom we named Sven. Yeah, most of the Russians were kept prone by the suppressing fire from the MGs, but nevertheless this one rifle armed guy finished off the whole trench with the use of grenades, close combat (against multiple opponents) and rifle shots! At one point Ruskies managed score a solid hit against him with a grenade but the effect was just a morale check which made him a minor hero just like the NCO during the start of this session. Lesson learned: don't use grenades on Germans -they'll just shrug of the shrapnel, sprout some hair to their chest and become heroes which is kinda bad for you... ! 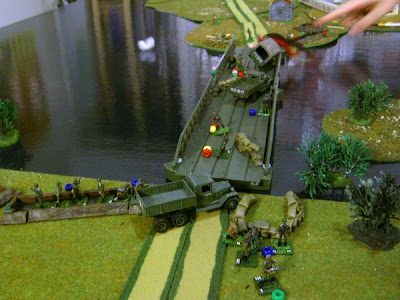 When the turns ran out, Germans had managed to get a noticeable foothold on the Russian side of the river, and the few remaining Russians in the gunpits or trench were either wounder and prone, dead, or running away wounded (their officer). The house did have few guys in OK confition. Then again the Germans had like 4-6 guys in good order on the bridge or the Russian side, the remainder were either wounded or dead. The suppressing fire from the MGs was wery effective (and lucky as during 6 or so turns only one jammed) but it did tie up a dozen Jerries and I did think that I'd run out of soldier before I could gain foothold on the Russian side... Luckily I just barely didn't. 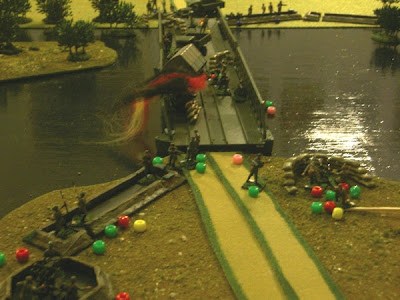